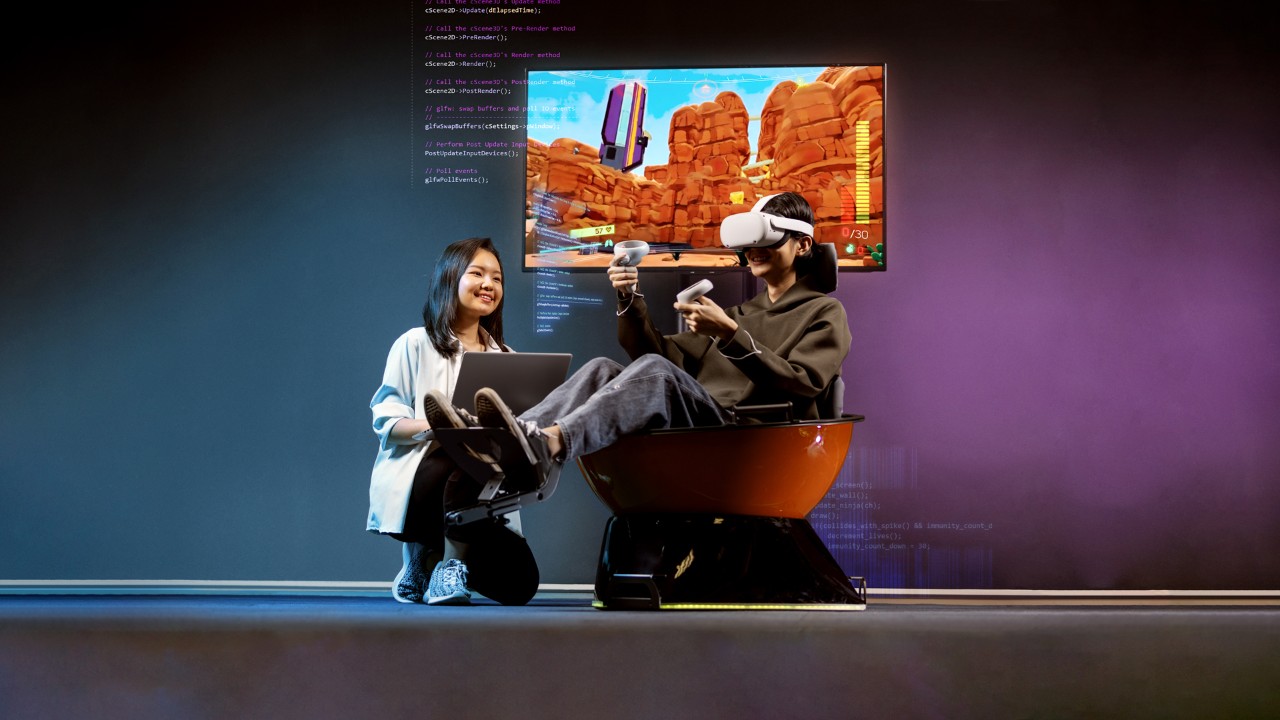 Build your very own game!

Keen to be skilled in programming and computer logic to develop PC, mobile and console games?

Want to immerse yourself in cool technologies such as Augmented Reality and Virtual Reality and prepare for hot roles in the gaming industry?

Discover how you can hone your technical and soft skills to succeed through this robust curriculum – curated by experienced game developers, for aspiring game developers.

The Diploma in Game Development & Technology is for you if you are curious about what runs under the hood in video games, and can’t wait to code and develop your own.

This diploma will be taught under the NYP-PCM starting AY2022.

Endorsed by industry leaders like Ubisoft, Unity and Sony Interactive Entertainment, it is informed by real industry intelligence and needs.

You gain additional industry certifications while you complete your diploma, putting you ahead of the pack.

The curriculum reacts dynamically and quickly to industry changes. You'll be equipped with the latest skills & knowledge.

Darryl LongManaging Director, Ubisoft Singapore and Ubisoft Philippines"The Professional Competency Model adopted by NYP is responsive and well-adapted to our needs in AAA game development. To keep up with our multidisciplinary, highly collaborative and fast-evolving video game industry, students need a curriculum that is strong in the core fundamentals and goes beyond teaching skills. Creating blockbuster AAA games requires creativity, critical thinking and teamwork – big picture thinking that should be instilled in our next generation of talent as early as possible.
We’re delighted to see that NYP has designed a model that closely reflects the way our competitive industry works and moves students toward building core competencies rather than rote learning subjects that can quickly become outdated. We remain committed to partnering with NYP to assist in shaping our future leaders and contributing back to the video games industry."

Joyce LawHead of Business Development SAPAC, Unity Technologies"NYP, alongside Unity, has developed a Centre of Excellence with the vision of providing students a strong foundation in game development and game engine application. We are delighted to see that NYP has enhanced its teaching pedagogy with the Professional Competency Model, allowing students more time to apply academic learning into practical work. The experience would in time give students better insights into the industry, providing them with the understanding and knowledge to enter the digital media industry."

Raymond WongDirector, Koei Tecmo"This is already a very strong course with solid foundations. With the enhanced pedagogy, we will expect to see graduates emerging with more flexibility and depth in their skill sets.
The most important segment will be graduates developing the capability to constantly learn. The games industry is moving very fast with 10% growth every year. We expect innovation and new ideas to be the constant. This course will prepare them very well for entry into the industry, and for subsequent career progression."