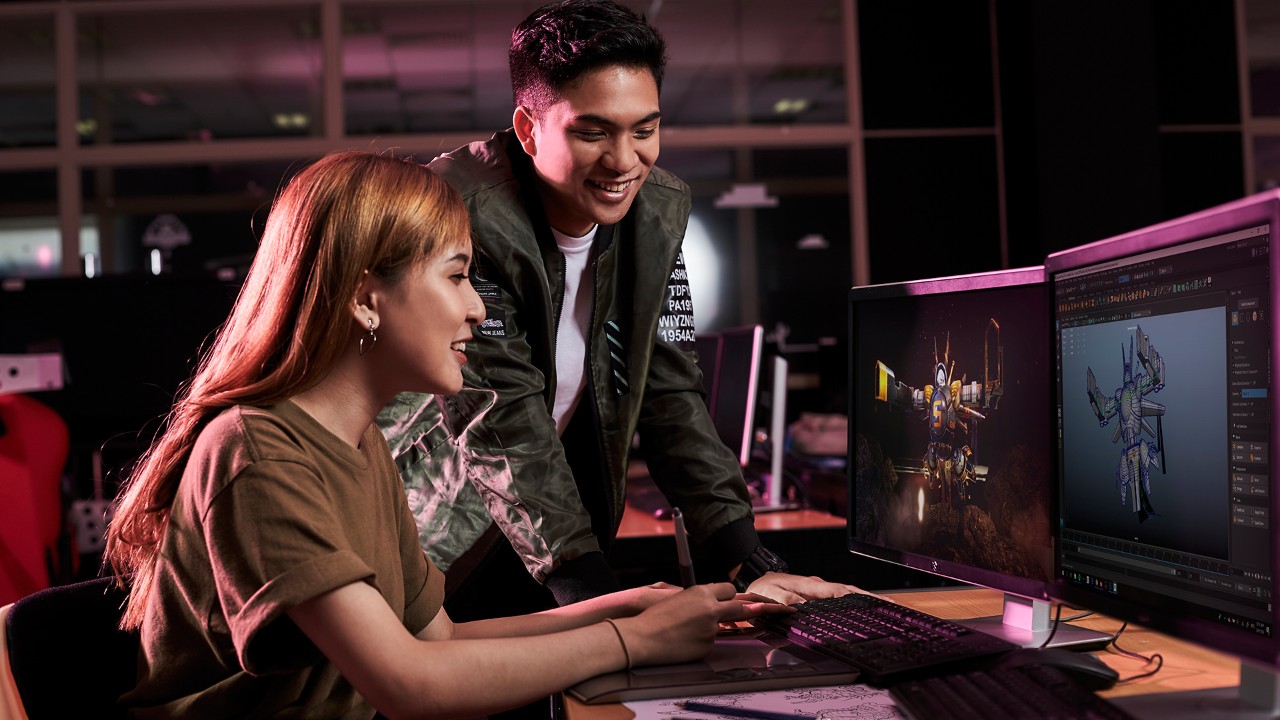 Get everyone hooked on your game

Are visuals and animation the most exciting part of gaming for you? Then look no further than our Diploma in Digital Game Art & Design to learn more about them.

SIDM is a pioneer in offering game programming and game art courses, so you can be sure to get the best training available. With a keen focus on creating captivating game visuals and designing interesting gameplay, this course will teach you the artistic side of game creation, as you learn to produce your own game art and design your game. Plus, gain insight into the entire game development process – from generating ideas to deploying completed products.

NYP is the only institution in Singapore that provides training in visual aesthetics and game design and development across all platforms, from PCs and mobile phones to game console systems such as Sony’s PlayStation, Microsoft’s Xbox and Nintendo’s Switch.

You will also learn to create and optimise engaging 3D visuals for VR/AR wearables and devices, including the Oculus Rift, HTC Vive, PlayStation VR, Microsoft HoloLens and Samsung Gear VR.

With the professional skills you gain in creating game art and designing games and various digital media applications, you will be highly sought-after by the video game industry. Get set to embark on an exciting career!

This diploma is for you if …

You love video games and want to create beautiful visuals and animation for the video game industry.

This module will enable learners to conceptualise and develop new ideas for a product or service. Learners will learn effective brainstorming methods, sketching and visualization. They will develop, pitch and refine their concepts for a proposed product or service that is scalable in scope.

This module introduces elements and principles that are applicable to 2D and 3D design.  Learners will also learn the effective use of colour theory and typography as integral elements with the visuals created.

This module covers the fundamentals of drawing such as the elements of drawings and various drawing media and techniques. It provides learners with essential perceptual drawing skills including perspective, shadow construction and understanding of space to create objects within a 2D plane.

Communicating well is a vital life skill, benefitting all aspects of our lives from professional life to social gatherings. It is thus important to be proficient in both written and oral communication. This module will enable learners to communicate effectively in different settings and on different collaborative platforms. There will be opportunities to practise and deliver various types of presentations, to learn to competently handle questions, and to effectively incorporate verbal and non-verbal elements when speaking. Learners will also acquire media and info literacy, and be able to produce clearly written and well-structured reports and proposals, following standard citation and referencing guidelines.

A consolidation module for concept ideation, requiring the learners to research, visualize, create, and applying concept ideation to formulate and pitch concepts. Each learner is expected to collaborate in a team, working to create a proof of concept through iterations, incorporating the knowledge and skills learned during the semester in this 2-week full-time project development.

This module covers the traditional knowledge on gesture, proportions and form development through modern approaches of recreating character figures and landscapes digitally. The learners will learn how to draw & illustrate digitally.

This module provides knowledge of the tools and techniques used to produce digital art for games. It covers mainly 2D assets in various formats. The learners will also be taught how to optimise graphics and the process of integrating graphics into a game. Learners will be able to create 2D game assets for games.

This module provides an overview of the production pipeline and introduces the disciplines required to manage and deliver quality projects in the digital entertainment industry. Learners will learn the management of various resources, games productions teams structure, task allocations, and time management to deliver quality projects. The development process for games, social and legal issues involved in game production will be discussed as well.

Introduction to 3D for Games [60 hours]

This module covers the basic theory and practice of CGI environment. Learners will learn how to model hard surface character, prop and environment, how to manage and layout 3D assets. Learners will also learn the basic principles and techniques of UV unwrapping, texturing, animation, lighting and shading. They will be able to create basic 3D assets for interactive digital media projects.

This module gives an overview of the game industry, game development team composition and production process. It provides Learners with the fundamental knowledge about game design that includes critical thinking, in-game analysis, effective gameplay, and pitching. Learners will develop their creativity and coordination skills to structure a game idea.

This project is designed to allow learners to put into practice the principles and skills that they have gained in the current semester. The focus will be on creating and conveying exciting game ideas and visuals, capitalising on the various skills that they have acquired into a 2D game. At various points during the project cycle, learners will be required to do presentations that will further hone their presentation and communication skills.